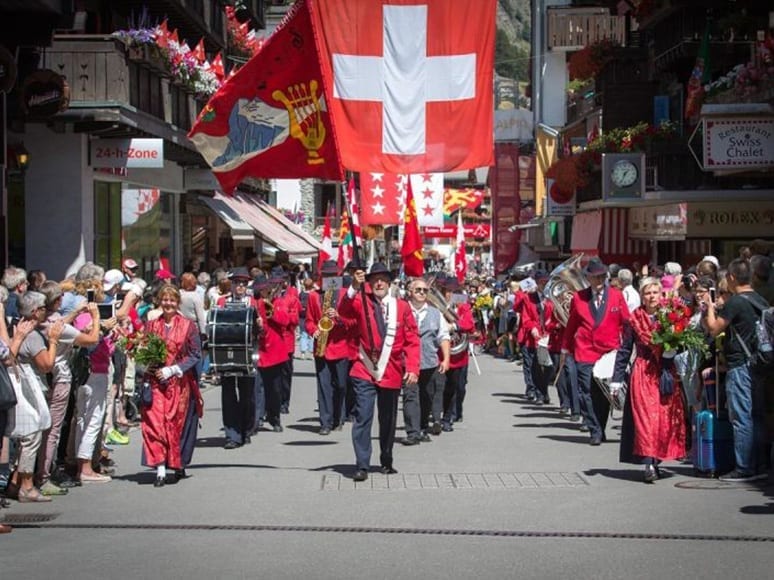 What began on a small scale in 1969 has now grown into the largest cultural summer event in Zermatt. Clubs from all over Switzerland show their traditions with music, traditional costumes, dances and colourful costumes from nostalgic times. The big parade through Zermatt on Sunday is the highlight. Around 1,000 active people take part. Guests can also enjoy a wide range of meals, performances by the clubs and an exciting animation programme for children. The net proceeds from the festival will go to the Zermatt Youth Fund. Every franc helps the youth to implement various projects in Zermatt.

The following points belong to the program:

The route starts at the station, runs along Bahnhostrasse to the church and crosses the Kirchbrücke bridge to the other side of the Vispa. Continue on Steinmattstrasse before crossing the bridge to the footbridge and then reaching the Obere Matten festival site.>

This website uses cookies to improve your experience while you navigate through the website. Out of these, the cookies that are categorized as necessary are stored on your browser as they are essential for the working of basic functionalities of the website. We also use third-party cookies that help us analyze and understand how you use this website. These cookies will be stored in your browser only with your consent. You also have the option to opt-out of these cookies. But opting out of some of these cookies may affect your browsing experience.
Necessary Always Enabled
Necessary cookies are absolutely essential for the website to function properly. This category only includes cookies that ensures basic functionalities and security features of the website. These cookies do not store any personal information.
Non-necessary
Any cookies that may not be particularly necessary for the website to function and is used specifically to collect user personal data via analytics, ads, other embedded contents are termed as non-necessary cookies. It is mandatory to procure user consent prior to running these cookies on your website.
SAVE & ACCEPT