The health of our guests and staff is our top priority. Our protection concepts are constantly adapted to the latest information and directives of the federal government. With the following measures, we guarantee that you can spend a carefree holiday:

We thank you for your understanding and support!

Information on the measures taken by the mountain railways can be found at https://www.matterhornparadise.ch/iSite/Corona-Schutzkonzept

The following links are helpful for all our guests from abroad:

Check the validity of your certificate in Switzerland here:
https://travelcheck.admin.ch/home
Convert your Covid-19 certificate to a Swiss certificate here: Covidcertificate-form.admin.ch
If you have any further questions, please do not hesitate to contact us. 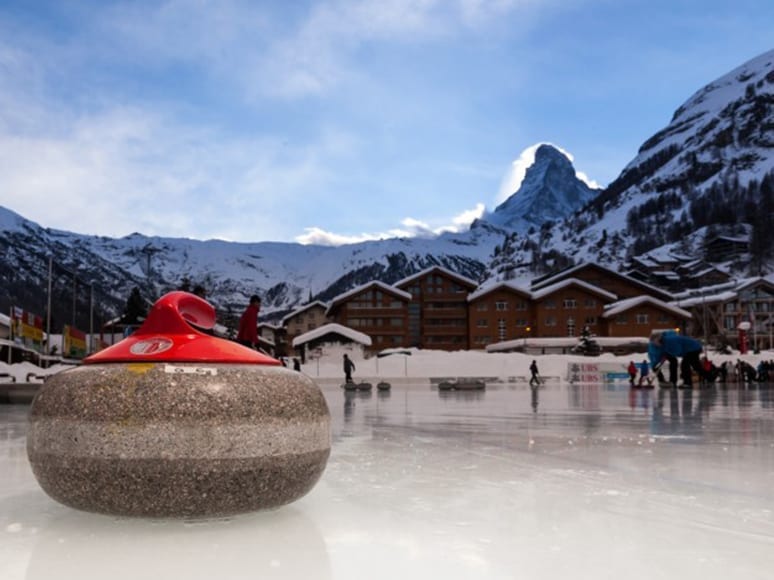 Every third weekend in January, over 300 curling players travel to Zermatt. They meet for the Horu Trophy, one of the largest open-air curling tournaments in Europe.

Curling is not only a game of skill, but also a game in which tactics play an important role. That is why curling is also known as “chess on ice”. The word curling comes from the Old English and comes from “curl”, turn – because the stone turns on the ice after letting go.

The curling game originated in the Middle Ages in Scotland. From Scotland it has spread to England, USA, Canada and also to mainland Europe. Curling is very popular in Switzerland. Both Swiss women and men have gained international acclaim. For example Patrick Hürlimann, Luzia Ebnöther, Mirjam Ott and Binia Feltscher. Many Swiss curling stars have already taken part in the Horu Trophy in Zermatt.

The first Horu Trophy was held in 1992. “Horu” comes from the local dialect and means horn. Horu is how the locals affectionately describe their all-dominant mountain, the Matterhorn. The mountain can be seen from the ice fields in the village centre.

As usual, the Horu Trophy is played in teams of four. For capacity reasons, a maximum of 76 team starting places can be allocated on the two Zermatt ice fields on 19 rinks. For years teams unfortunately have to be rejected, because the interest for the tournament is very big. The number of participants is therefore usually 304. Around 35 percent of the participants are women. Most of the players come from German-speaking Switzerland. But Scots and other nations are also honoured.


When it comes to welcoming the teams, it’s obvious that you’ve known each other for a long time. Because many teams – including many locals – take part in the tournament every year. Although fun and games also count, the technical and tactical level of those teams that are regularly among the winners is extremely high.
But to make sure it is really cosy, a Zermatt Ländler formation plays on Saturday for barbecue fun. The cosy get-together is also one of the highlights for many.

Curling – at home in Zermatt for a long time now

A long tradition connects Zermatt with curling. Through the guests from the traditional curling nations who spent their holidays in Zermatt, the sport reached the locals and spread among the guests, so that it enjoyed great popularity within a very short time. A curling hall was built in 1979. Since the closure of this hall in 1998, only outdoor games were played. The Curling Club Zermatt CCZ was founded in 1933. It carries out the tournament in each case.

The Horu Trophy also fascinates spectators. Some like to watch the tactics of the star players. The central ice field, where the finals will be held, is located in a kind of rectangular arena. The spectators stand elevated on a grandstand and can watch from a clearly arranged position. Admission for spectators is free.

This website uses cookies to improve your experience while you navigate through the website. Out of these, the cookies that are categorized as necessary are stored on your browser as they are essential for the working of basic functionalities of the website. We also use third-party cookies that help us analyze and understand how you use this website. These cookies will be stored in your browser only with your consent. You also have the option to opt-out of these cookies. But opting out of some of these cookies may affect your browsing experience.
Necessary Always Enabled
Necessary cookies are absolutely essential for the website to function properly. This category only includes cookies that ensures basic functionalities and security features of the website. These cookies do not store any personal information.
Non-necessary
Any cookies that may not be particularly necessary for the website to function and is used specifically to collect user personal data via analytics, ads, other embedded contents are termed as non-necessary cookies. It is mandatory to procure user consent prior to running these cookies on your website.
SAVE & ACCEPT